Someone must have had this idea already

At the moment here in the UK we're in the third Covid-19 related lockdown. Every morning I go for a walk to get out the house, clear my head, and try and get a handle on my degrading mental health - it's early to avoid both other people and distraction. As there's little else to be doing my mind often finds itself mulling over some tech idea or other - unblocking my code or trying to find alternative approaches that might have benefits.

This morning was no different, I specifically want to avoid talking about the tech iself - but it's enough to say that I'm doing something new and I have a point of friction with the process so in between music tracks it was spinning this thing round like a Rubik's Cube.

And I had an idea. Like so many of my ideas it wasn't simple or straight forward - it was probably a whole other project that would take a lot more effort than my friction was ever going to cause, but it wouldn't just benefit me - but others too. I liked the idea. And as I was trying to figure out the basics of the idea, identify the gaps where my knowledge and skill may need a little bolstering - a familar voice piped up, whispering into the space where I was currently moving boxes and arrows that made up the flow diagram of my mind. And it said what it always says.

"Surely someone else has already thought of this. There are people way smarter than you that work on this stuff - if it was a good idea, they'd have written it already"

Now I recognise that voice, it's a close cousin to the imposter syndrome so many of us feel so often - that voice might stop us speaking out in a meeting or questioning a plan at work. But this voice is a little different, a little nuanced, this one isn't about the fear that others will find you out as technically incapable; this one is aimed at your creativity, that you're slow on the uptake, not original, that all you're good for is implementing other people's ideas but everyone is having your ideas faster than you or are smart enough to see the flaws of your bad ideas straight away.

That voice accompanies me on every technical quest I take, a not so silent companion making everything a little bit harder. And as I listened to that voice this morning I realised I was gonna try this project anyway - while the voice droned on. It was the first time I realised that my experiences haven't been able to shut it off, but they are able to stop it being quite so loud.

Give your idea some time

The easiest way to stop this voice affecting you is by not entertaining the idea straight away. I know this might seem a little odd so let me explain.

I'm not an idea factory, I'm not waking up every day with a dozen new things I can create - but I'm sure once every couple of weeks something will pop in there. Some of those ideas? They're bad. Some have been done before, some are useful but not worth the time they would take, and some are good. I have no idea which is which. So EVERY new idea goes on my board. Here's my board right now. 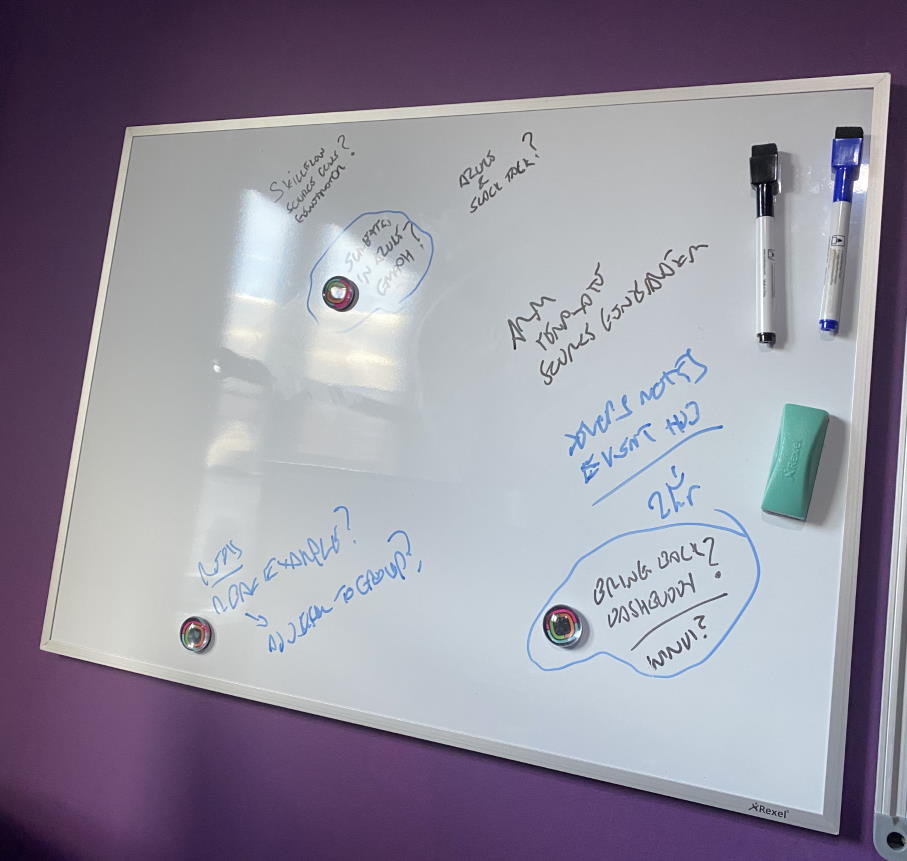 You don't have to be able to read it (there's a reason I type everything) but each idea I have goes on here. It could be a notepad, a scrap of paper, a text file, whatever. But the idea goes there. Then the magnets I've got? Those are the ones I can focus on right now - top 3.

Even if I'm just sifting through ideas I can get so caught up in figuring out all the problems for all of them I get nothing done, and the voice gets louder at how all my ideas fail and must be rubbish. So each new idea goes on this board and then if I think it's worth my time - I have to move one of the magnets. But the others are still milling around in the background and I might dedicate ten minutes here or there to figuring out a technical issue for one of them until it's worthy of a magnet.

What this means now is that every idea is worth thinking about, but by the time I'm happy moving a magnet to it - I've built up a defence for the voice. I haven't found an alternative, I haven't seen it elsewhere, I think I understand most of the problems involved and I want to face them. It doesn't go away but it does help.

This one was a lot more difficult early on, but is a big ol' hammer of a weapon against the voice now. Your idea might not work - there might be a very good reason why it's not a thing. But right now you can't see that reason no matter how hard you try. So that means there's a gap in your knowledge, in your understanding of how these things work. Possibly there's a whole new thing to learn and explore and add to your already impressive arsenal of tools that you can use to defeat technical problems.

So you pitch the idea to yourself differently. It's not about creating this amazing new thing - it's about learning what the problems are. You're not doing anything new, you're just educating yourself, so the voice can say what it likes until you've found out what the problem is.

If there is a problem, that's great news because now you know - and I've lost track of the number of times I've been more useful to a team because I've played with an idea that didn't work so I know the pitfalls and have enough experience to help them avoid them or waste their time hitting the same hurdles I did.

If there isn't a problem then you get to the end and your idea worked and is awesome and the voice has no recourse but to be quiet for until then next one!

The idea exists - so?

This one is best put a little more wordy: If you can't be the spark that doesn't mean you can't fuel the flame.

Real change isn't this big bang moment - you don't have the idea and suddenly this amazing project is fully formed and helping others or changing lives. The spark is a critical step - but so many sparks pitter out to nothing. The spark has to become more than itself, it needs to grow and spread and light other imaginations and that is just as critical a step.

If you have an amazing idea and you find out that someone else is already building that idea? That doesn't stop you being just as creative! In the world of tech that can take many forms. If it's open source then look at the project and see what's missing, see how you can improve what's already there because there is SO MUCH creativity in improvement that perhaps others can't see.

Perhaps your idea had a few natural next steps - you'd seen the bigger picture and it's not been realised yet with the existing project, so you don't build the first step but you own the second or the third - show others how it can be built on - be an inspiration. Show the voice that you can be creative with your own spark or someone else's, prove it wrong so it has less power the next time.

So these are just a few ways to try and get around that voice. A little bit of a brain dump of what I've experienced.

And in case you think I'm waxing lyrical? It took me weeks to submit my first PR to the Alexa.NET project because I was so low on self-esteem and the voice was loud in my ears about how my ideas were never first and I couldn't possibly help. But I love the way I've expanded that project from where it was when I started. My Slack libraries were built despite there being several other options because I really felt there was a way that better suited the way I wrote code, and the voice was just a laugh in my ears as I tried to get that first version pulled together. But I was right and others shared that view.

Your vision may be unique, it may be shared by others, but regardless of the spark the difference is in how you achieve it. Your preference, your understanding, the choice you want to give your users, there are SO many reasons for you to indulge yourself and prove you can do it. The voice will have something to say - but this is to show that you're perspective is different, that whether it's one person or many that have that spark you're able to show your creativity in a totally different way.

Nothing makes your vision any less valid.